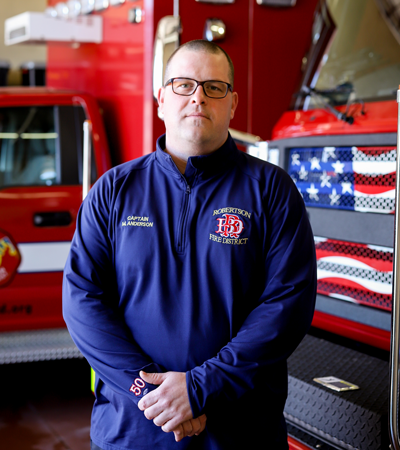 Growing up, Matt Anderson always had an appreciation for firefighters.

“When I was a little kid, we lived across from the Berkeley Fire Department and I loved watching the trucks go on calls,” he says fondly.

Matt, who has been in the fire service for two decades, joined Robertson Fire Protection District in 2005 and has risen to the rank of captain. He holds special certifications in hazardous materials, rope rescue, trench rescue, confined space rescue and structural collapse rescue.

“Every day is different, which is what I love about the job,” Matt says. “There is always something new to learn. I literally learn something new every day.”

For Matt and others at RFPD, the work of serving and supporting his community doesn’t just end when a call is complete. He describes a shift when his crew was dispatched to the scene, where a young man’s heart had stopped while playing basketball.

“We were able to get his heart started again, and a few weeks later we were invited to walk him out of the hospital when he was discharged,” Matt says. “He had made a full recovery. A few of us still keep in contact with him.”

When not on-duty, Matt enjoys cooking — fire safely, of course! — and spending time with his wife and two daughters.

Posted in Meet Your Firefighters